‘Spider-Man: No Way Home’ Is A Spider-Fan’s Paradise

The amount of hype surrounding the release of “Spider-Man: No Way Home” rivals that surrounding “Endgame.” Rumors and theories ran rampant as to what this final installment of the MCU’s Spider-Man trilogy would bring to the table, especially after trailers revealed the return of villains from previous cinematic iterations of the character. Yet, with expectations so high for the film, the question had to be asked: Can any film live up to such hype?

Yes. It most definitely can. While it certainly isn’t a perfect film, “No Way Home” provides not only an incredible super-hero experience but pays beautiful homage to both the character’s history and his fanbase.

The most anticipated rumor about this movie thankfully turned out to be true: Tobey Maguire and Andrew Garfield reprise their roles as their respective Spider-Men. It was truly an exhilarating experience hearing the whole theater break out in cheers as they walked on screen near the end of the film’s second act. Donning their classic suits, their presence adds not only a sense of pure nostalgia but also a deeper gravitas to the film as each Peter brings his respective wisdom and experience to this story. Beyond that, the three Spider-Men have an incredible sense of chemistry, leading to some great comedic and heartfelt moments.

Along with the return of these heroes, we also get to witness the return of their classic villains played by their original actors. While Willem Dafoe’s Green Goblin, Alfred Molina’s Doc Ock and Jamie Foxx’s Electro get most of the spotlight, I still thoroughly enjoyed the returns of Thomas Haden Church as Sandman and Rhys Ifan as Lizard. They all channel the original charm of their characters while also bringing something new to the table.

The return of villains from previous iterations of “Spider-Man,” such as Electro, Sandman and the Lizard, makes for an enjoyable, nostalgic ride.

Willem Dafoe takes the spotlight as the leading force in the movie’s conflict. After regaining his lucidity for a short period of time and gaining Holland’s trust as Norman Osborne, his Goblin side takes back control, letting all the villains loose and killing Aunt May. The dramatic depth that Dafoe brings to this film gives emotional weight to his character arc; Osborne is no longer simply a psychotic villain but a psychotic villain with an ideology diametrically opposed to the idealism Spider-Man fights for. He becomes not only a physical threat for our hero but a psychological and emotional one as well.

This film gets a lot right when it comes to its story. The plot, for the most part, is very strong and decorated with some incredible action sequences. The continuation of Holland’s character arc is engaging and serves to set him up for another trilogy of “Spider-Man” films. We get to see him go from a naive hero to someone more seasoned and experienced while still retaining his desire to do good. Seeing his darker side and his battle within himself was a necessary step for Holland’s character, and I appreciated that the movie takes this direction with his character.

Another thing that this film gets right is showing a love for the fan community. There were so many references to memes and running jokes from among Spider-Fans that made me smile or laugh. Osborne’s famed line “I’m something of a scientist myself” makes a cameo, along with a subtle nod to the meme of multiple Spider-Men pointing at each other when the three Peter Parkers are trying to figure out which one of them Ned is addressing. One of the greatest additions, however, is the appearance of the classic Spider-Man mantra, “With great power comes great responsibility.” This line is such a staple of the character and has finally received its rightful place in the MCU.

We get even more wonderful cameos beyond the Spider-Men and their villains. Charlie Cox reprises his role as Matt Murdock (aka Daredevil) for a short scene as Peter’s lawyer. Part of me wanted to see more of him or even see him don his crime-fighting suit and join the final battle, but even the few seconds he was in the movie were a delight. We also got to see DUM-E, the robotic arm that dedicated Marvel fans will recognize from the “Iron Man” films. 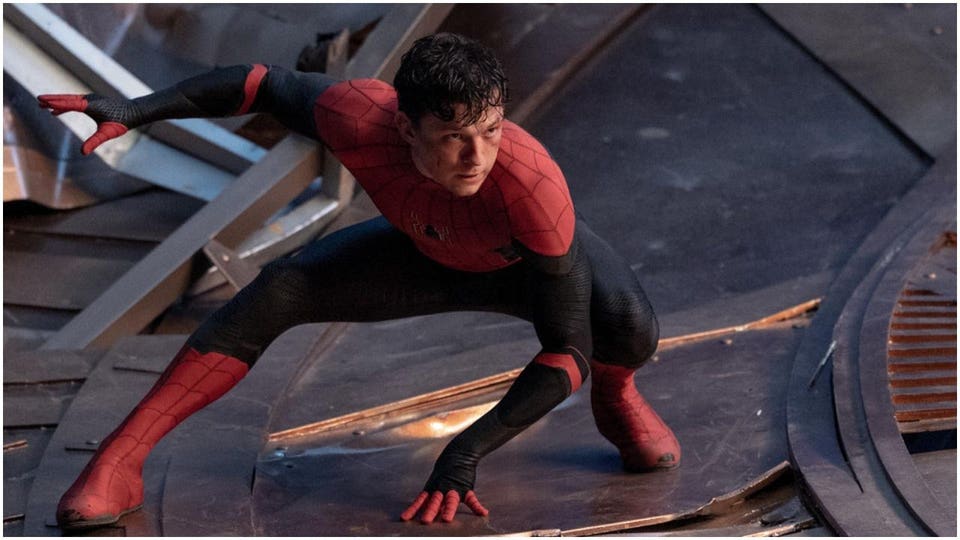 The ending, which sees Peter having to make an impossible choice, leaves the story feeling incomplete.

One of the few criticisms I have is the ending. At the end, Strange is forced to cast a spell that will make everyone forget who Peter Parker is, including his friends. Despite promising to come find them and explain everything to them, he instead leaves them to enjoy their lives free from the consequences of being friends with Spider-Man. While I understand his decision, it still falls flat given the heartfelt promise he makes them moments before. We don’t get to see much of what kind of life he makes for himself beyond his moving into his own apartment and making himself a new suit. While we obviously couldn’t get a super in-depth look at his new life, the ending still leaves things feeling more incomplete than it could have.

That said, the future of Spider-Man is very bright. Marvel has teased a new trilogy with Tom Holland, so we know that we will most likely be seeing our favorite web-slinger again. If the multiverse is still around, we may even see Maguire or Garfield return. One hint at the franchise’s future is the inclusion of FEAST, a homeless shelter in New York where Aunt May works. Before this film, FEAST’s most recent appearance was in the recent Spider-Man PS4 game. In that game and in the comics, FEAST is owned by Martin Li, aka the villain Mr. Negative. Perhaps Martin Li will make an appearance in future films.

We also get a reference to Miles Morales, when Electro says he hopes there is a “black Spider-man out there.” While two sequels to the very successful “Spider-Man: Into the Spider-Verse” have already been announced, we might also witness Miles’ introduction into the live-action MCU sometime soon.

Regardless, “No Way Home” is an amazing installment in the Spider-Man canon. While it isn’t perfect, it is satisfying for long-time fans and an amazing ride to enjoy.

“Spider-Man: No Way Home” is now available to watch in a theater near you.

No Replies to "‘Spider-Man: No Way Home’ Is A Spider-Fan’s Paradise"