Bond Goes Out With a Bang

It seems as if the first initial trailer for “No Time to Die” came out years ago, and that’s because it did. The final outing for Daniel Craig’s James Bond was one of the first films to be delayed back in March of 2020 when the COVID-19 lockdowns began. After being pushed back three times from its initial release date in November 2019, the film finally premiered October 8, 2021. In the midst of all these delays and pushbacks, I wondered whether the film would live up to the long-lived expectations. Luckily, Cary Joji Fukunaga’s “No Time to Die” goes out with a bang and is an appropriately bittersweet conclusion for Craig’s iteration of Bond.

Daniel Craig suits up once more to take down a sinister villain, yet the story feels very distinct from previous installments. To start, this is the longest Bond film to date,clocking in at a whopping two hours and forty-three minutes . All this time is well-spent, however, adding significant weight to the story at hand.

At no point did the story feel drawn out; it is a lot more character-focused, with less emphasis on the questionable immorality that has defined previous films. Granted, Bond has been through a lot up to this point, so it makes sense todive deeper into the depths of the relationships he formed in “Skyfall” and “Spectre” than have him find a new femme fatale to romance..

The locations visited by Bond, meanwhile, are some of the most picturesque to date. Whether it was the sprawling streets of Matera, Italy, the overgrown brush in a hazy forest or the crashing waves of a remote island, they should appeal to those who appreciate beautiful landscapes and purposeful cinematography.

Though a bit generic, Bond’s last mission is to prevent a clandestine organization from mass-producing a biomechanical weapon with the capability of wiping out a majority of the human population, all while driving fancy cars, brawling in unique locales, and teaming up with new faces. Lashana Lynch (“Captain Marvel”) and Ana de Armas (“Knives Out”) are among some of the fresh faces to gear up alongside Bond to take down Safin, the big bad behind it all played by Rami Malek. 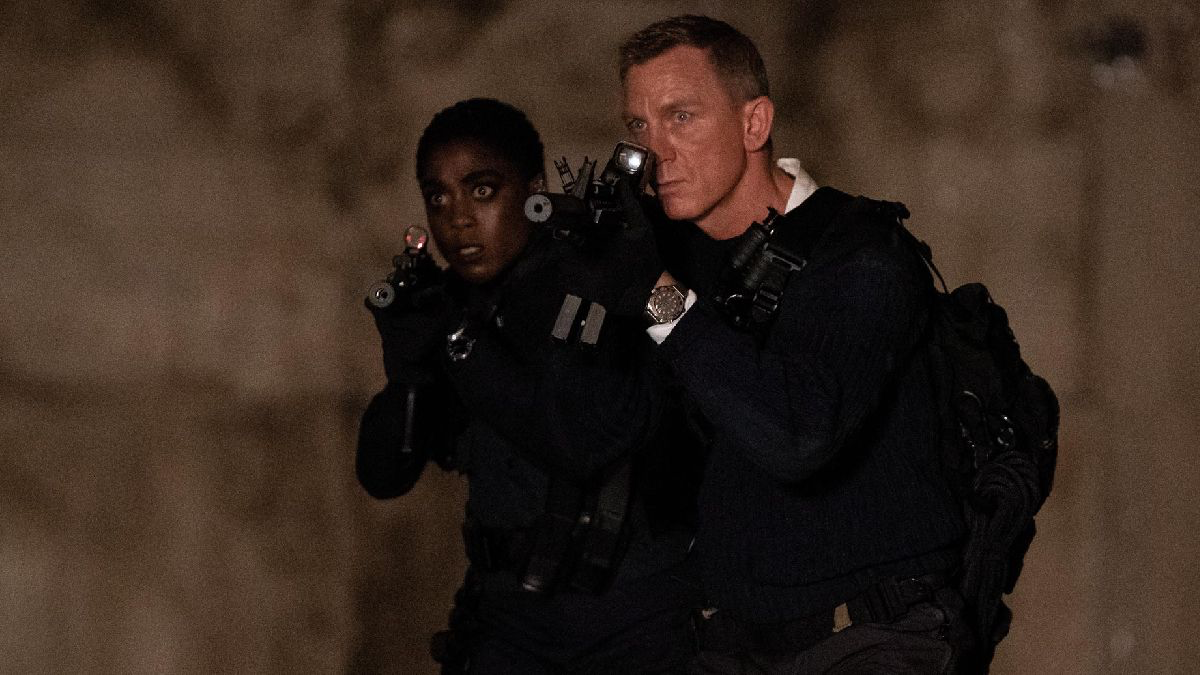 The rivalry between Bond and Lynch’s Nomi is the comedic highlight of an otherwise tonally dark plot.

The rivalry between Bond and Lynch’s Nomi, an up-and-coming 00 agent, is the comedic highlight of an otherwise tonally dark plot. The competitive back-and-forth between the two characters, one who has had the license to kill for years and the other stricken with an ego similar to Bond’s as a starting assassin, was my favorite character dynamic of the entire movie Based on the trailers, I initially presumed that this relationship would be annoying and clumsily executed, but, especially nowadays, marketing can often prove to be misleading. This sentiment is representative of the entire film: I walked into the theater not expecting many of the more weighty parts of the movie because of impressions given by the trailers

All in all, “No Time to Die” is an enjoyable and bittersweet swan song for Daniel Craig’s Bond. It’s a satisfying acknowledgment of the previous films, ushering in new and exciting story elements and characters. Bringing such a noteworthy saga to a close is a daring feat, but one that this film accomplishes appropriately nonetheless. The balance of carefully choreographed action with intriguing dialogue and character development left me wanting more, and I was ultimately pleased by the ending to this enjoyable and surprisingly heart-wrenching story.

No Time to Die is currently available to watch in theaters

Owen Nolt is a junior Middle Childhood Education major. He loves being a member of the campus activities board as well as enjoying the latest Ninentdo releases.

No Replies to "Bond Goes Out With a Bang"