‘Spirited’ is a heartfelt, festive and irreverent treat

Charles Dickens’ “A Christmas Carol” is a well-trod territory by this point. Everyone has a different favorite movie adaptation – mine is “The Muppet Christmas Carol” – and the story makes an appearance every year in theaters around the world. There’s a good reason for this, as “A Christmas Carol” is far more than just festive entertainment but an enduring story about humanity, change and what it means to be a good person.

“Spirited” isn’t necessarily an adaptation of “A Christmas Carol,” but it is a continuation. Not just from a plot perspective, but with its themes. The film explores the reality of “A Christmas Carol.”  Can a person truly change for good overnight? What does it look like to live with the guilt from a life spent in selfishness?

These questions are some of the film’s strengths, as it gives it a freshness that keeps “Spirited” from being a stale rehash of “A Christmas Carol.” Nonetheless, it is still a Christmas musical comedy starring Ryan Reynolds and Will Ferrell, so these themes are never fully explored. The movie ends in a satisfying place from a plot and character perspective, but barely scratches the surface of its potentially rich themes. 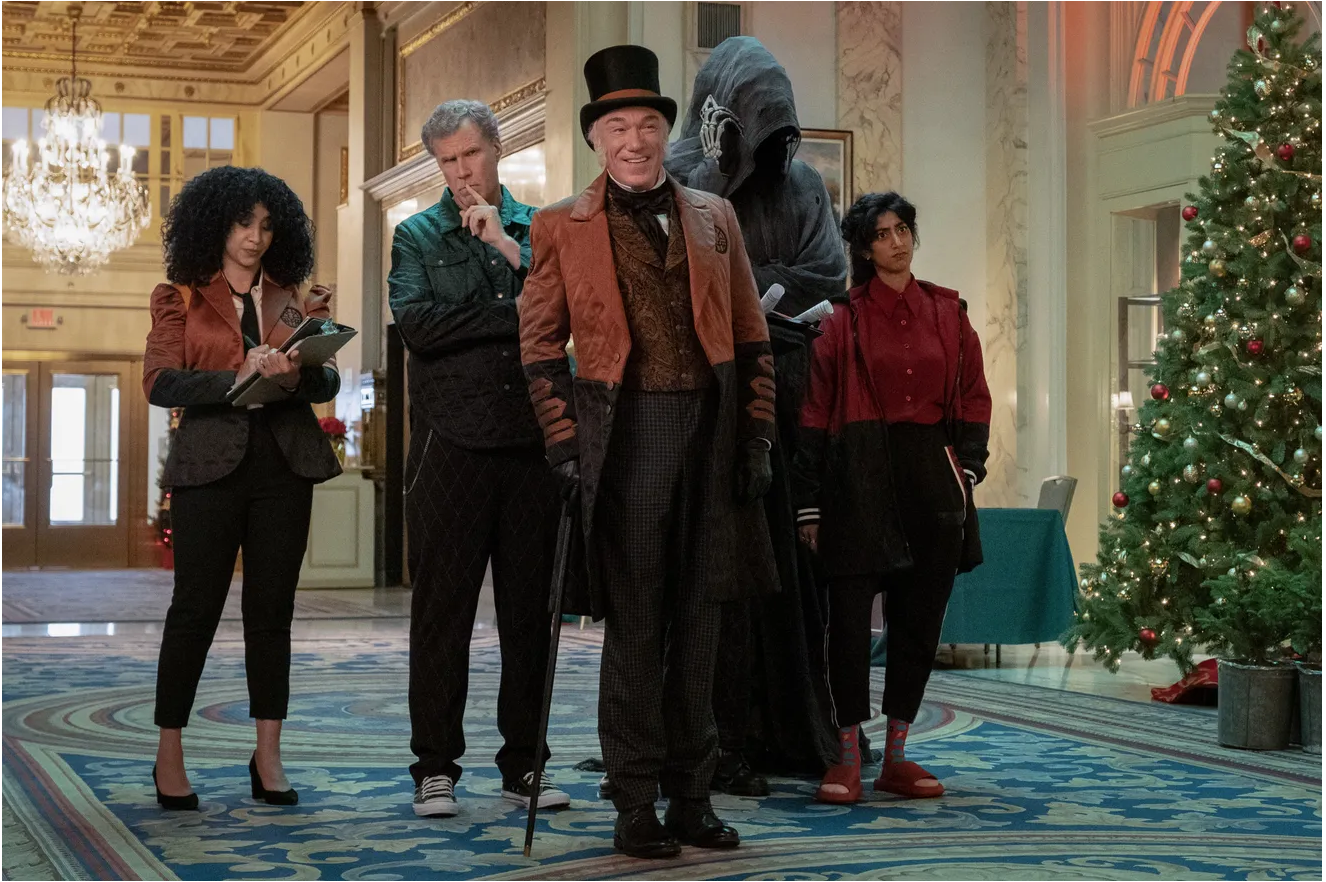 This team of ghosts work together to redeem a new soul every year.

The plot focuses on the Ghost of Christmas Present, played by Will Ferrell, as he tries to do something impossible: redeem an unredeemable. Clint Briggs, played by Ryan Reynolds, has been flagged as unredeemable because of his belief that humans never change. Even as others on Present’s ghostly team, including Jacob Marley and the Ghosts of Christmas Past and Yet-To-Come, played by Patrick Page, Sunita Mani and Tracy Morgan respectively, try to convince him that Briggs might not be someone they can change, Present remains determine to redeem an unredeemable. After all, it happened once before.

My favorite update to the story has to do with Clint Briggs’ occupation. While Scrooge’s main vice is his tightfistedness, Briggs is depicted as a pretty decent boss and not nearly as money-grubbing. What makes Briggs a terrible person, is his work as a media consultant, where he spreads lies and discord on a daily basis. This shifts the moral emphasis from a lesson about being more generous to a story about the impact that our words have on others.

“Spirited” does have a version of Tiny Tim. While the audience doesn’t get much of an opportunity to care about the character, the vision that the Ghost of Christmas Yet-To-Come shows is still a genuine gut punch. The film’s jovial, irreverent nature makes it very easy to get swept up in the humor and to even side with Briggs’ jabs. This makes the darkness of the Tiny Tim storyline hit even harder, and also hits too close to home. While unfortunately “Spirited” doesn’t fully develop this theme, it does remind us how easy it is to push others down, and how hard it can be to repair the damage that we cause. The Ghost of Christmas Yet-to-Come might get cut short, but not before delivering visions of a tragic future

A big strength of the film is its musical score written by Benji Pasek and Justin Paul. While within Broadway circles the duo is best known for their work on “Dear Evan Hansen,” within Hollywood they’re best known for writing the songs for “The Greatest Showman” and “La La Land,” the latter of which they won an Oscar for. The duo has written songs featuring some of the most talented singers working in entertainment today, but they’ve also written for actors with far less singing talent. Neither Reynolds nor Ferrell are particularly spectacular singers, but Pasek and Paul’s songs highlight the best of both actors’ abilities, while still being catchy and instantly memorable songs. While not every song is a winner, songs like “Bringin’ Back Christmas,” “Good Afternoon” and “Unredeemable” have resulted in the “Spirited” soundtrack dominating my Christmas music playlist.

“Spirited” also understands how to film their musical numbers in an interesting and engaging way. A lot of the art behind making movie musicals has been lost in recent years, but “Spirited” nails it. Regular speaking scenes flow into musical numbers fairly seamlessly, the choreography is phenomenal and the movie isn’t afraid to be a little goofy. Musicals can feel a little silly and awkward, and “Spirited” leans into that, not in a self-deprecating way, but in a good-humored way that emphasizes the strengths of its format while allowing the viewer to giggle at its weaknesses.

Overall, “Spirited” is packed to the brim with Christmas spirit, heartfelt characters and an interesting spin on “A Christmas Carol.” It certainly won’t be to everyone’s taste, and some of the cruder moments will keep it from becoming a family favorite. For me, however, “Spirited” has become an instant favorite, and I cannot wait to rewatch it next Christmas season.

“Spirited” is now streaming on AppleTV and playing in limited theaters

Janie Walenda is a sophomore Global Business major and the A&E editor for Cedars. She is passionate about musicals, animation and cold brew.

No Replies to "‘Spirited’ is a heartfelt, festive and irreverent treat"